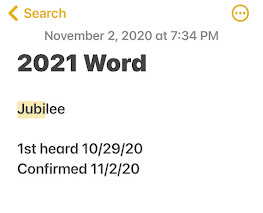 I got into a habit a few years ago. I’d have a dream, or get a prodding from the Holy Spirit, and I began to make a note of it on my phone. After my Dad passed away, and we found ourselves going through his things, I even thought to myself, “Man, people are going to think I’m nuts when they read the stuff on my phone!” Most of what I’ve recorded may not be a word from God. But some of it…some of it is undeniably spot on.

I think it was the end of 2010 when I started following a blogger who spoke about choosing a word for the year. I thought it was a great idea, and as the years went by, I was always surprised how my words always did tie into the year I was having. Of course, some skeptics told me that I was just looking for the word once I had established it. That’s why it’s hard for me to be around skeptics! At the end of 2010, I started what would be a year-long journey of unemployment, and I really needed a word to stand on. He gave me “strength” and it helped get me through a year of not knowing what tomorrow would bring.
As the years passed, I’d find friends and co-workers who did the same thing. We’d share our words at the beginning of the year. We’d even write them up on the dry erase board in our office. It was our way of putting a stake in the ground for the year. We’d celebrate together when God would reveal deeper levels of why the word was meant for us in the particular year.
I was curious as to what my word for 2021 would be. My word (that ended up being “words”) for 2020 were “abide” and “arise”. I remember being perplexed as to how they fit together, they seem so counter to one another. But as 2020 began to reveal itself, it was clear how you could do both at the same time.
In the year that seemed to take so much away, I wondered how God would follow it up for me. I remember hearing the whisper on 10/29/2020, “Jubilee is coming.” I remember putting a note in my phone when I heard it. I wish I had written how it was confirmed on 11/2/2020, but all I know is that it was. And once it was confirmed, it started popping up in so many places.
At first, I tried to make sense of it in my own understanding. I am turning 49 this year…actually today. Yes, I am actually typing this up as I turn 49 and enter the year of jubilee counting up to my 50th birthday.
Oh God…I’ll be 50 next year.
How could THIS be jubilee? I am still unmarried, without children, living in a pandemic with no sign of any freedom, debts being cancelled or deals involving large portions of land. The “Jubilee Year” is supposed to be the year of release. Meanwhile, I’m stuck in a house until a pandemic ends.
But just as God has done so many times before, He has taken me on a journey of redefining what the jubilee year looks like for me. I remember being in a staff meeting at the end of 2020 where everyone was sharing how they were “thriving” in 2020. Whether it was starting a family or relationship, getting healthy or succeeding at work…I sat in my zoom square trying not to reveal the tears that were welling up in my eyes. If thriving and success were going to be measured by those standards, then that ain’t me! I didn’t have anything to share except that I recognized that what I had with Jesus is special.
I recognized that what I had with Jesus is special.
I sat with God in that. I wrestled with Him a bit. I asked Him why I had found myself speaking into so many people’s lives and situations to see Him then move in those lives and situations…but yet I still stood here feeling like I hadn’t gotten my own “moment” yet. What about me?  And as I sat with Him in a very vulnerable place, exposing the “ish” that I felt about that, I felt like He asked me, “But what if that’s your way to thrive?” What if your “thing” is that you hear from Me and then speak it over people, and then get to see those things I share with you happen for them? What if that’s your thriving?”
Since I made that proclamation in my own heart, it seems that the years of not feeling special, seen and loved fell off. This entire time, God was preparing me for this year of jubilee: the year that I fully grasped the cancelled debt of insecurity and the freedom that comes with knowing He and I have something special together.
Now, I won’t say that I still haven’t had my moments. There are still things I want so bad for Him to tell me about my own life and situations. But I believe as I continue to focus on my special relationship with Him, He will continue to redefine the person I see staring back at me in the mirror.
So here’s to the next 365 days around the sun. I’ll go ahead and get my shofar ready to blow.
at February 22, 2021