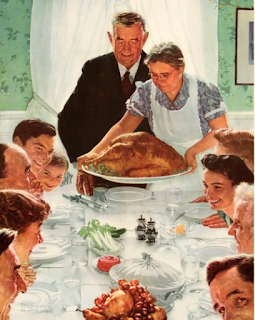 I put another national holiday behind me. They seem to sneak up with no warning sometimes. I’m not sure why I don’t see them coming. That moment I realize I didn’t make plans that involved any type of human interaction. That moment I realize I wasn’t invited to a table to just ‘be’ with others. I was productive. But I was without community. And it left me feeling…yeah…I’d say it had left me just “feeling."


In an attempt to figure out what I was “feeling” I came across a Norman Rockwell picture entitled “Freedom From Want” (pictured above). If you don’t know the name Norman Rockwell, you probably just don’t realize you do. He was a very popular American artist whose work has graced many magazine covers, has probably been replicated a bazillion times and is best known for his depiction of American culture. His piece “Freedom from Want” was done after US President Franklin Roosevelt delivered his state of the union address known as the “Four Freedoms” speech. Freedom from want was described as the basic right to an adequate standard of living including food, clothing, housing and healthcare.


However the freedom I found myself seeking from seemed so small when you figure that I have all the 'wants’ President Roosevelt spoke about. At this time of my life, I have food, clothing, housing and healthcare. And not only am I grateful for that, I realize I have those things mostly because of where I was born and who I was born too. But I still found I had a ‘want’ – a want that I see in Norman Rockwell’s picture. I wanted to be wanted. I wanted to be around the table. I wanted to be gathered around a community of people, or at least invited to the table.


I have been blessed to be the confidant to many. But there are some days I believe the lie that I'm a friend to few. I convince myself that I’m fully content to be alone until I see all the fun people had doing stuff together. And it’s at this point that I realize I’m walking down a road I don’t want to be. If I don’t stop now, I could find myself in the land of self pity (poor me, why wasn’t I considered? I don’t have what I want) and near the river of envy (they have what I want). What do you do when you realize you need freedom from the “want”?


The spirit of self pity wants me to believe that I have the short hand of the stick. It wants me to believe the lies of “poor me” so I’ll wallow and get stuck in a moment of emotion. Self pity makes ‘me’ the focus. Self pity makes my wants all that matter. The spirit of envy seems to go hand in hand with self pity, especially in this day and age. Forget the times in which you didn’t know you weren’t invited to the table…now you get to see pictures updated every minute in color and waiting for you to “like” it. The spirit of envy opens the door to offense because now you want what they have.


Once you recognize you are entertaining these spirits, the next step is to speak against them. If you are in Christ, you have the authority to speak to them and tell them to leave. I then speak and proclaim the truth of His word over my life. By doing this, I shift the focus off of me and onto Jesus. By doing this, I seek first His kingdom and His righteousness. By doing this I put into practice the things I have learned and the God of peace is with me. By doing this, I make His wants my wants.


I hope you don’t find yourself needing freedom from the wants today. But if you do, know that you have a Heavenly Father who loves you, and that you are always welcome at His table.
at September 02, 2014 1 comment: