This past weekend was especially rough. In the process of assisting my Mom in some tasks that she is trying to tie up, I found myself knee deep in my Dad’s emails. Many of them written the last week of his life. Like so much of his life, he was working on helping a family member, he was doing it with everything he had in him, and he was doing it with excellence. There really was no one like my Dad when it came to handling all of life’s “stuff.”

I found myself in tears as I read through emails that didn’t really matter to the world, but they were the last words my Dad would write. The last ideas he would have had. The last thoughts he would have thunk (so not a word…but I’m crying now and trying to laugh through it.) I wondered why I had to be the one to do this. Why did I have to spend most of my nights home, knee deep in responsibilities with a grieving wife and a dog that whines until you pet her? I was having a major pity party.

As I was sorting through this, along with the gazillion other things that needed to be done, the news came on the tv about the “superbloom” that was going on in the California desert. If you know anything about California, you are aware of the fact that we have been in a drought for a few years now. I’m not sure we’ve had substantial rainfall since I was in college…and let’s just say that was many moons ago!

The newscasters explained that because of the lack of rain, there were seeds that laid dormant in the desert for decades just waiting for the sky to open and dump enough rain to wake them up. Well, it happened this year. And after record rainfall, we now have fields and fields of wildflowers in the desert.

The news snapped me out of my funk. I mean, how profound and biblical is that?! Seeds that have laid dormant for DECADES have been WATERED and have BLOOMED in the DESERT!! If there’s one thing I know about God it's that if He does it for the seeds, then He will do it for me too! 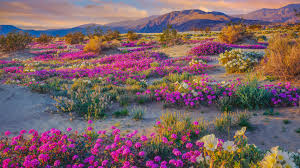 So how do you get through the season before the bloom? Here’s a few things I’ve learned along the way:

Recognize your seeds are dormant, not dead.

This is temporary. And when you forget that, repeat: This. IS. TEMPORARY! I know temporary doesn’t always make me feel better because temporary could be days, months and sometimes years. But what I loved about the story about the Super Bloom is that a lot of times, in the desert seasons, I could start to think that everything is dead. My dreams. My circumstances. My hopes. To know that even in the desert, seeds could just lay dormant and then one day, suddenly, erupt in the most beautiful of flowers made me take a long, much needed sigh. It made me look forward with great expectation to those things that I can’t see now, but believe are coming anyway …hey, that kinda sounds a lot like faith, huh?

Make sure you continue to water the desert.
Those dormant seeds stay dormant unless they receive the rain. Lots of it. When I think about “watering” my desert season, I think about checking my thoughts and my words. Where do I let my mind go? What thoughts do I actually allow to travel from my brain and come out of my mouth? We all know that death and life is in the power of the tongue, so remember to speak life when you find yourself in the desert. Another great way to make sure you are watering well is to surround yourself with others who will water your desert too. The desert season is not a good place to have naysayers, aka hot wind storms, kicking up and making you feel even more parched. It has been important during the desert season to have friends who check me when I begin to waver from speaking life over myself.

Prepare for the impending bloom.

You gotta believe it’s coming and you gotta prepare for when it does! If there’s one thing I have learned in my desert seasons is that I could either waste my time feeling sorry for myself, or I can use my time to prepare for the harvest on the way. Because guess what…that’s whatthe desert season is for! If I spent my time speaking death over my life, looking forward to nothing and not believing anything is going to change…I’m going to either miss it when it happens, or be so overwhelmed with life that I can’t enjoy the bloom once it’s here. Harvest. IS. Coming! I don’t know when and I don’t know how, but I do know I want to be ready for it. And sometimes that’s hard for people like me who are so used to making things happen. Sometimes God just wants me to lay “dormant” for a while, get some things completed, forgive some people, rest and rest some more. At the right time He will make it happen and I know I will fully bloom into all that I am meant to be.

Today’s Forecast:  Rain in the desert. A lot of it.

Silver Lining:  Even in the desert, the more rain, the more flowers.