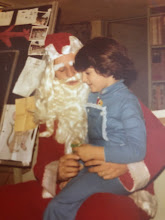 I came across this picture and laughed to myself as I made a connection I’m not sure I had ever made before. You see, I grew up deathly afraid of Santa Clause. I’m not sure if it came from some scary Santa story my brother told me, or maybe it was just the creepiness of a dude showing up in our house in the middle of the night. I would not even walk on the same floor of the mall as Santa! And the one year my Dad borrowed the company Santa suit to surprise me Christmas morning…well, I guess he had to tear the beard off because I lost my mind when I answered the door only to find Satan…I mean Santa…standing in front of our house. I loved the one special gift Santa left each year that was wrapped in some different paper or had my initial painted on it with glitter (because surely it was from him and not my parents…Mom would NEVER glitter paint our packages!) But anytime he made an appearance…forget it…I was not having it!

This is literally the only picture I have of myself as a kid with “Scary” Santa. Looks like I’m nervous…but I’m not crying. And why you may ask? Well, what I do remember about this picture that even my Mom doesn’t remember is what happened before it was taken. That blue overall set with the matching  turtleneck was a little snug. So snug that my pants ripped the moment I jumped on his lap! Now thankfully, nobody else noticed that this happened, and it was close to the end of the day so I’m sure I just tied my jacket around my waist. But perhaps THIS is where my fear of Santa began!

It’s interesting to think that there was fear associated with the first Christmas. I mean, how could the birth of our Savior elicit fear? But a few years ago I watched The Nativity Story, and it was one of the first times I really connected with what Mary and Joseph went through. I mean if anyone had a reason to be fearful, it was Mary, who found herself pregnant as a virgin in a time where her fiancé could execute her for being so. And could you even imagine the amount of emotions that Joseph must have gone through at that time? Both had to believe that they were visited by angels and instructed on what their next steps would be and they had to choose to obey. I am sure that they had heard, or maybe even been witness to, a woman executed for cheating on their betrothed. Yet, instead of connecting that past experience with their current one, they chose to have faith and believe that they did not have to fear. They had to believe they heard from heaven and they had to have faith to endure. What I also love is that heaven knew how they were going to feel…and they weren’t shamed for it. Instead, messengers were sent to remind them, “don’t be afraid.”

The connection I made with my “Scary” Santa incident is that one instance could have been the reason I never wanted anything to do with him. Maybe I wasn’t really afraid of him. Maybe it was just the memory of him and, what could have been, a very humiliating day. Maybe I was more afraid that I’d jump up on his lap again and possibly rip my pants in a way that everyone would notice.

It made me think: Are there areas in my life that I am letting one past experience create fear in a present one? Do I let fear keep me from experiencing life because of that past experience? Have I “walked-the-top-floor-of-the-mall” in hopes that I would not have to face the fear head on?

Today’s forecast: Memories tell me, " Don't do it, you  might split your pants again."

Silver Lining: Heaven tells me “Fear not! We know a pretty good Seamstress.”